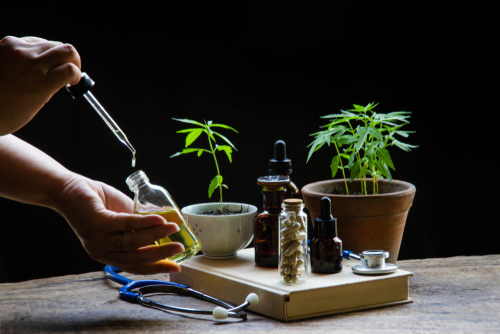 Phytocannabinoids are among the most often consumed substances in the world. Their use rates have gone up, thanks to the growing legalization of goods with cannabidiol and tetrahydrocannabinol for recreational and medicinal purposes. CBD and THC are the two most popular and most often studied compounds out of all the phytocannabinoids in cannabis.

Research shows that cannabinoids can help to ease symptoms of many different conditions, which include multiple sclerosis and pain, plus chemotherapy side effects. Furthermore, growing evidence suggests the possible use of phytocannabinoids as treatment options for sleep disorders, but there is a need for further research in that area. That is to say, it would be best to have more research-based evidence before using CBD for sleep.

It appears that phytocannabinoids can have a dosage-dependent effect on conditions like insomnia and PTSD. Some discoveries show reduced sleep latency due to midrange dosages of cannabidiol for sleep as well as more sleep latency following the consumption of higher CBD doses.

How Can Phytocannabinoids Affect Insomnia And Pain?

A recent study of fibromyalgia patients showed how superior artificial tetrahydrocannabinol, nabilone, was than amitriptyline for their sleep. Anyhow, it is still not known whether that could be attributed to nabilone’s impact on the quality of sleep or pain.

Many randomized control trials now explore what effects phytocannabinoid products would have on chronic insomnia patients. One of those is the CANSLEEP trial that investigates the effectiveness and safety of an item with cannabidiol and tetrahydrocannabinol for that population.

Cannabinoids For PTSD And Apnea

In many studies on PTSD patients, nabilone improved insomnia and the overall quality of sleep, reduced the intensity and frequency of nightmares, and made daytime flashbacks less frequent occurrences.

In apnea research featured in Neurotherapeutics, researchers wrote that there is more interest in the utilization of phytocannabinoids mainly because of their neuromodulatory effects on the ganglion of the vagus nerve. Research with rodents showed that phytocannabinoids suppressed apneas, even though with lessened REM sleep and sleep efficiency.

As per the recent PACE trial’s results, dronabinol reduced the AHI (apnea-hypopnea index) and improved self-reported levels of sleepiness more than placebo in OSA patients. For the uninitiated, dronabinol is an artificial form of tetrahydrocannabinol.

What The Existing Evidence Indicates Regarding Phytocannabinoids’ Effects On Sleep

It shows promise for the utilization of phytocannabinoids in the future for adjunctive or primary treatment of health conditions, like insomnia, Willis-Ekbom disease, and apnea. Anyhow, it is worth noting that the research about the matter is still in its nascent phase and that generalizing available data is tricky.

For instance, the so-called PACE trial was done in the form of a phase II trial, and it might soon include more data on cannabinoids’ effectiveness. Other research, like on the utilization of cannabis derivatives for Willis-Ekbom disease, comprises case reports.

Which Mechanisms Are Thought To Be Causing These Effects?

We still do not fully understand the mechanisms whereby cannabinoid goods may impact sleep disorders. Those mechanisms may vary widely. The endocannabinoid system (ECS) is made up of cannabinoids. Those are the cannabinoids present right through the body in various biological systems, which include the immune and central nervous systems.

It is also worth noting that there exist more than 100 phytocannabinoids in cannabis, in addition to many artificial versions of those compounds. That could cause numerous possible effects, according to the interaction between molecules and receptors.

The Implications On The Utilization Of Phytocannabinoids In Sleep Disorder Treatment

Sleep medication is complex, and it has an interplay of respiratory, social, and neurological factors that is subject to variation. Phytocannabinoids may affect many of those systems in a person.

What Further Developments Are Required In This Space?

Clinicians can no longer afford to ignore people’s interest in cannabis’s possible therapeutic effects. Cannabis’s limitations must be noted; for instance, several previous pieces of research used cannabis strains and cannabinoid varieties that differ considerably from the strains in modern goods.

There is a perception that cannabis derivatives are safer than pharmaceuticals as sleep disorder treatments. That perception can cause harm since any pharmaceutical has risks if utilized improperly. Dramatic scientific progress is not likely to be made when cannabis comes under the DEA’s Schedule I Controlled Substances.

Tags: cannabidiol for sleepCBD for sleep